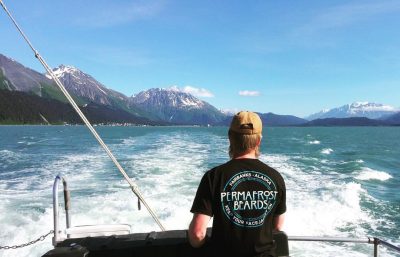 Thanks to a partnership between two local businesses, First Friday this July is about to get…hairy.

“We help keep your facejacket on,” said Nick Adkins, co-owner of Permafrost Beards.

This will be the debut First Friday for Adkins. In a humorous twist, this First Friday will be the first Adkins has attended. Until he met with Sandra Harley, owner of Rings and Things, Adkins didn’t know First Fridays were a thing.

Harley discussed selling Adkins’ product, adding that holding a First Friday show would be a great way to get his brand out into the community. First Friday’s are tailored for promoting local artists, Harley had said.

“I don’t know if I’m an artist,” Adkins, a twenty-two year Army veteran, said at the time, “but tell me more.”

Permafrost Beards began out of a need. “We had trouble finding beard products in Fairbanks that would keep a beard looking like an intentional choice instead of something you had because you were too lazy to shave,” Adkins said. 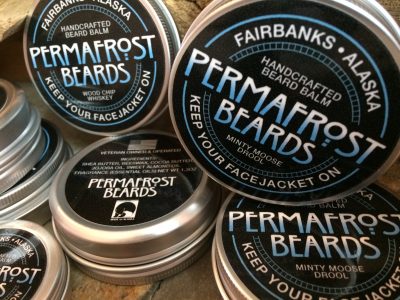 After trying a lot of different product – most of it too greasy – Courtney Adkins (Nick’s wife) had “this crazy idea” to try and make their own. “We decided to start making it because no one else was doing it in Fairbanks,” he said. Thus, Permafrost Beards was born.

Adkins’ product line includes beard oil and beard balm, available in four different scents including: Wood Chip Whiskey, Minty Moose Drool, Arctic Birch and Denali Frost. A list of what each scent smells like can be found here. All of Permafrost Beards’ product is Made in Alaska certified.

Permafrost Beard’s balm includes beeswax, which helps a man shape his beard and keep “flyaways” under control. Adkins is keen to mention the balms use of beeswax as he’s currently in the works to secure Alaskan beeswax from a local farmer. He hopes to make an announcement during his First Friday show.

“It’s going to happen,” Adkins said, “we want to work with other Fairbanks folks.”

During the First Friday event, Adkins and a fellow beard-haver and product tester will be available to answer questions and offer tips and tricks for better beard maintenance. They’ll offer scent samples, as well as instructions on how to use the oils and balms.

“You’ll get to meet some bierdos,” Adkins said.

Refreshments will be provided, including Harley’s famous meatballs. Live music will be provided by keyboardist Walter Jones. Rings and Things is located inside the Co-Op Plaza. The event will run from 5-8PM on July 7. RSVP to their event here.