News You Can Use: What’s New Downtown? 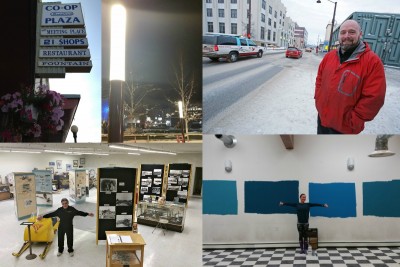 Since winter of 2015, downtown Fairbanks has experienced infrastructure changes, made new friends, and welcomed a bevy of businesses and property owners into its fold.

Beginning in December, Exclusive Paving installed pedestrian lighting and traffic signals along Cushman Street. The new lighting has dramatically brightened Cushman, making it more friendly for downtown visitors. The new traffic signals (while installed) remain inactive at this time, for the exception of the 1st Ave. intersection.

The Co-Op Plaza has been abuzz with activity since several new shops opened inside its walls. Since late 2015, the plaza has welcomed five new businesses, including Sweet Street (baked goods), Lost & Found (a used record shop), Woven Sylver (bath and body), After Midnight (clothing rentals) and Rings & Things (curios and collectibles). A new Mediterranean restaurant is also slated to open in the Co-Op Plaza early this year.

In addition to new businesses, the Fairbanks Community & Dog Mushing Museum recently expanded further into the Co-Op Plaza. The museum opened a new exhibit along the plaza’s mezzanine which features a crosscut of an historic miner’s cabin. The expansion also includes a new artists showroom for featuring First Friday artists.

Rock Valley Boutique announced on it’s Facebook page that it is moving from being opened year round to be open seasonally. The women’s clothing shop will re-open on May 1.

Spruce Tree Montessori stated in late December that it had finalized the purchased of the former Alaska Railroad Depot. The building will see a summers worth of renovations converting it from old station to new school. Spruce Tree will re-open in its new location in September 2016.

Lavelle’s Taphouse, soon-to-be Fairbanks’ newest drinking establishment, will open this spring. The taphouse will feature a wide-range of domestic and local micro-brews and will encourage guests to bring-their-own-food.

Illustrator Hannah Foss was announced as the Chamber of Commerce’s 2016 Artist of the Year at their December 8 membership meeting. Foss’ piece, Sun Wolf, is inspired by Haida and Kwakiutl formline drawings and masks. It depicts a wolf with the heart of the sun leaping high into the sky in summer and prowling along the ridged horizon in deep winter. A fitting description of the season shifts that make Alaska unique. Foss is no stranger to downtown having been a featured artist during 2013’s Window Project.

William Yost, supervisor of the Community Service Patrol, was featured on the front page of the January 4 edition of the Fairbanks Daily News-Miner. Yost oversees the day-to-day operations of the CSP a program which is managed by the Downtown Association of Fairbanks.