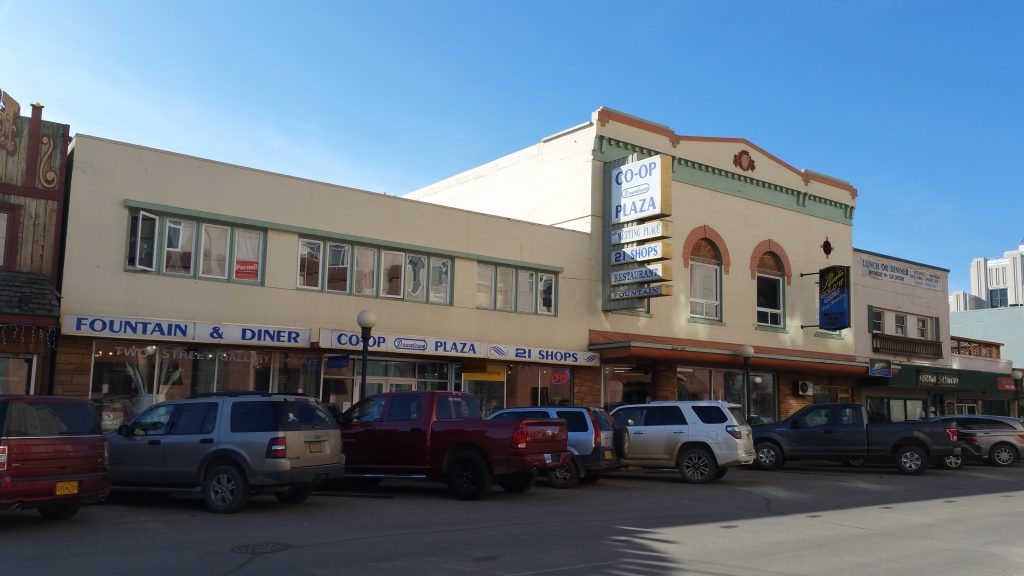 Every city has a center. They tend to be historic, include classic buildings and be active hubs of their respective communities. For Fairbanks, that center is downtown. But what, then, is the center of downtown?

I’ll give you a hint. It’s historic, has gone by several names, was the city’s first concrete building, used to be a theatre, and is now a mall. As I’m sure you’ve guessed, it’s the Co-Op Plaza.

The Co-Op Plaza began life as two different buildings: the Fairbanks Empress Theatre (built in 1927) and the Co-Op Drug Store (built in 1934). The plaza, as it is known today, was created by joining the two buildings together in 1962.

Lisa Williamson, who manages the property, remembers the plaza when it was a five and dime. When she was a teenager, Williamson used to be a “soda jerk,” slinging sodas and milkshakes to a bevy of thirsty customers.

The main floor of the Co-Op Plaza is full of shops. Enter from Second Avenue, and you’re immediately welcomed by Two Street Gallery on your left and The Crepery on your right. At Two Street, you’ll find the artwork of two-dozen artists, ranging from photography to scrimshaw and from watercolors to metal crafts. The gallery was formed as an artists’ cooperative in 2012 and is a consistent First Friday hub.

In The Crepery, you’ll find the culinary delights of Ivan Gyaurski. The restaurant began in Pioneer Park during summer 2014 and was so successful that Gyaurski opened a brick-and-mortar location in the plaza that same year. Although Gyaurski still loves his crepes, you’ll now find him just a few steps away at Eastern Treats, in the old Co-Op Diner, cooking up a wild assortment of Mediterranean and Eastern European delicacies.

Take a right and you’ll find Alaska’s Far Northern Knives and Custom Leather and Gifts. The two shops inhabit one storefront and are run by the brother and sister team of Patrick Holland and Nan Tumbleson. Holland, a knife maker, can create anything from a small dagger to a Roman gladius. You give him an idea and he’ll forge it out of Damascus steel. Tumbleson, a maestro of leathercraft, is perpetually busy, creating leather goods in her studio upstairs.

The same hallway includes Rings and Things and Alaskana Raven Books. Sandra Harley, of Rings and Things, runs a co-op herself. Her shop features 45 different vendors and, in many ways, is a community unto itself. Many times, one vendor will stop by to refill their stock only to immediately purchase something from a different vendor. Next door, at the book shop, James Rogan-

Leahy is always available for a conversation that leans toward the literary.

Facing Second Avenue is one of the plaza’s oldest members: Beads and Things. The bead shop, run by Ann and Ron Goessel, has been in the plaza since 1987. The shop is a mainstay of downtown and continues to be one of the best places to find Alaska Native beadwork and supplies anywhere in Fairbanks.

A second hallway, leading toward Third Avenue, will introduce you to AIE Tours (which specializes in tours of Alaska), A Blooming Rose (one of Fairbanks oldest flower shops) and Asian Treasures (which always has that unique something you’re looking for).

There is something special about homemade cookies and pastries made from scratch, and baker Jen Krzmarzick, of Kitchen Vixen, agrees. However, she doesn’t make run-of-the-mill cookies; she makes cookies with pizzazz. In her shop, Krzmarzick sells artisan sugar cookies and French macarons (her favorite), as well as other pastries. She opened her shop inside the Co-Op because she thought downtown’s art and artisan scene was growing and she wanted to be a part of it.

On the plaza’s top floor, you’ll find Woven Sylver (which features soaps, lotions and clothing), as well as the Fairbanks Community and Dog Mushing Museum. The museum, located inside the former theater, is volunteer-run and dedicated to local history. The museum began as a passion project of local historian Steve Arthur and was originally mobile, housed in the back of Arthur’s pickup truck. In its current location, the museum showcases exhibits on Fairbanks’ early mining days, the Great Flood of 1967 and mushing. If you’re lucky, you might be able to snag a chat with history aficionado and museum director Bob Eley.

A journey through the plaza gives you a better understanding of what makes Fairbanks great: its sense of community. If you spend time in the plaza, you see that everybody knows everybody and that many people shop, eat and recreate within the building’s historic walls. Although the Co-Op Plaza has changed throughout the years, it has always remained at the center of life Fairbanks.

This is the third of a series of four columns celebrating our downtown businesses.

This column is brought to you as a community service of the UAF Community and Technical College Department of Applied Business.