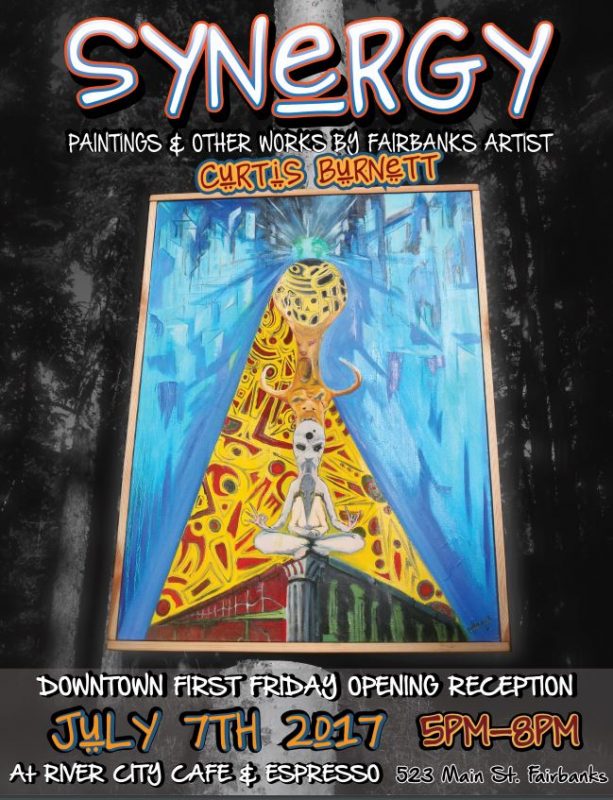 His show, Synergy, encompasses his signature style as well as some experimental work.

Bennett began drawing and painting at a young age, including a stint painting cars. He decided to pursue his passion and return to college where he received his BA in Art from the University of Alaska Fairbanks.

“There are so many great reasons to be a part of a Fairbanks First Friday experience,” said Tiffany Ayes, general manager at River City. “The cafe itself is downtown in the heart of Fairbanks and I feel as though the cafe should represent the reason that we call this city our home,” she said.

Ayers added that Burnett was slightly apprehensive about doing a show.

“He said his work was somewhat surreal and not everyone’s cup of tea,” Ayers said. “I told him that I don’t believe that art is about pleasing a general aesthetic.”

Burnett’s preferred medium is oil paint but he continues to explore other mediums including woodworking, metalworking and photography. He is a self-proclaimed “expressionist impressionist” with a unique style that includes bold colors, subject matter and brush strokes.

“His work is unique and that is something I get excited about,” said Ayers. “If it piques your curiosity, makes you think, evokes a feeling, then your art is doing all it needs to do.”

River City Cafe and Espresso is on 2nd Avenue in downtown Fairbanks.