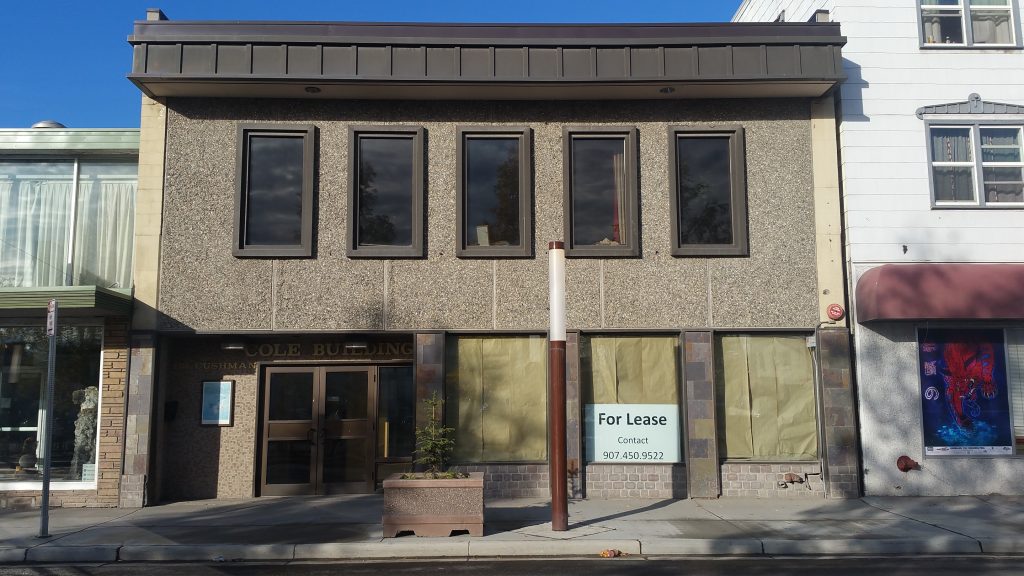 If you haven’t seen the new lights spiraling up Cushman Street’s birch trees, it’ll be dark enough soon that you will. The lights are a nice touch, an effort by the city to take care of its nice things, like Cushman Street as a gateway to downtown.  Downtown itself is one of our community’s nice things and it’s getting nicer. DOT is wrapping-up its work on Noble Street, whose finish will strongly resemble Cushman’s. Echoing this additional build-out, the city will soon add 60 on-street parking spaces in the downtown core to provide more convenient access to downtown’s 300+  businesses.

The community is invited to join a Commercial Space Open House October 6 from 5-7 PM. The event will showcase business location opportunities downtown, as well as raw land ripe for residential development. Tailored for those on the hunt for better rental situations, the open house will also interest the general public.

It has been an interesting year for downtown – with a variety of happenings, as usual. As a sampling, consider: Two pot shops and two liquor licenses re-entered downtown. The Mecca Bar went smoke-free, with the Big I to follow this winter. A Funeral Home opened on Noble Street.  Life Sprout Chiropractic moved downtown. Spaulding chiropractic stayed downtown when they moved, purchasing and remodeling a large commercial building. Big Brothers Big Sisters also moved within downtown. Yukon Title doubled its footprint. When last Frontier Mediactive moved to 5th Avenue, Mojo Music Studios moved in behind them on 1st Avenue. The Al Ketzler building got an insulating facelift and the Midnite Mine is under new ownership. Empire Realty and Summit Realty opened their doors downtown.  The Co-Op Plaza is still 100% full. Bill Satterberg finished his John Deere tribute and Scott Allison dealt-up more public art. Alaska’s Senior Senator Lisa Murkowski moved her Fairbanks offices downtown to the lovely Court House square, 250 Cushman Street. And finally, three separate groups are studying three related topics:  how the city can fund the wrecking of the Polaris once the city owns the Polaris; the feasibility of a downtown site for a Convention Center and Performing Arts Center; and now the downtown plan.

The urge is strong to take the character and color in downtown’s compact geography and mix it with intention.

After repealing downtown’s last plan (the Vision Fairbanks downtown plan) the Fairbanks North Star Borough is leading a new planning effort for downtown that will use a public process to develop goals for downtown. The new plan – when completed in roughly a year – will fulfill the needs of municipal governments, FMATS and DOT to use such plans. The Vison Fairbanks downtown plan was not implemented despite being adopted into the Borough’s comprehensive plan in 2008. Its so-called “implementation strategy” – making Cushman a 2-way street and creating new zone types – ran afoul of the political powers at the time. While those measures would have helped downtown, downtown has still fared well. Why not have a plan that is implementable – and see what happens? The first public meeting is September 27th at the Westmark Hotel’s Gold Room from 6-9 PM.

Despite some large departing tenants, like Wells Fargo’s Cushman branch, downtown continues to attract businesses, and more come than go. It can be argued that downtown is developing evenly in the near-total absence of a downtown plan. And yet there are over 100,000 square feet of office and retail space available for lease downtown, which suggests the need for coordinated efforts to support and attract residential and business growth downtown for the community’s benefit.

To see the market opportunities in downtown, we invite you to the Commercial Space Open House October 6 from 5-7 PM and the kickoff public meeting for a new downtown plan September 27th at the Westmark Hotel’s Gold Room from 6-9 PM.

If you cannot attend the kickoff meeting, but would like to make comments then we encourage you to view our 4-page draft plan developed over the last 18 months.