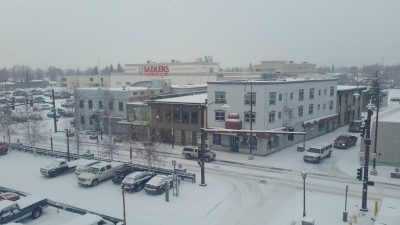 The Fairbanks City Council passed an ordinance recently that amended existing code to help downtown’s sidewalks (and sidewalks everywhere) remain free of snow and ice in winter.  The ordinance states: “A person having control of any premise bordered by a graded or paved sidewalk must promptly remove any snow which falls on the sidewalk and must remove or sand any ice which forms on the sidewalk, to the extent that the snow or ice is an impediment to pedestrians.”  Sidewalk snow can be pushed over the curb into the gutter so snow plows can remove it.

The ordinance amended existing code to add a mechanism for snow removal should the “person having control” of a premise not remove the snow on the sidewalk bordering their property.  The ordinance further reads: “The director of public works, or designee, is authorized to direct the removal of snow or ice that is not promptly removed form a sidewalk as provided . . . or that was taken from private property and moved to a sidewalk, street, avenue or alley. The cost of such removal shall be charged to the owner of the property, provided the owner or person having control of the premise fails to do so within 24 hours after having received notice from the director of public works, or designee.”

Portions of sidewalks needing attention this winter can be called into called into the Public Works Department at 459-6770 or e-mailed to pwmail@fairbanks.us  The city does not wish to be a sidewalk cleaning enforcer, but it does want clean sidewalks downtown, as do we.