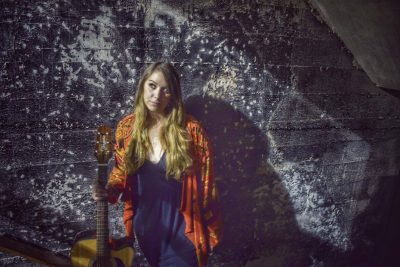 This weekend, downtown will host a pair of country-rock flavored singer-songwriters in the form of Lizz Slabaugh and Anna Robinson. The guitarists will perform several shows in Fairbanks, with two performances downtown: one at the Co-Op Plaza and the other at Lost & Found.

Slabaugh began writing her own songs last year after receiving encouragement to do so by Minneapolis singer-songwriter Ellis Delaney, whom she studied under during the 2015 Acoustic Alaska Guitar Camp in Wasilla. According to Slabaugh, she writes “by quiet observations and aims for a mixture of dark and dreamy.”

Slabaugh, a former resident of Fairbanks, now lives in Olympia, WA. While she is returning to the Alaska to take part in this year’s Acoustic Alaska Guitar Camp, she added that Fairbanks is “where her heart still resides.”

Robinson began writing music at the age of 14. According to the musican, she began writing as a means for overcoming challenges she faced from an early age. Since then, she continues to share her story and her experiences through her music. She is currently enjoying touring around Western Washington, sharing her stories and songs, while working on her first demo album to be released this fall.

Slabaugh and Robinson will be performing the following shows in Fairbanks: